This is sort of an elaboration on altheamesh.com/governance-paper, and may be moved into it as appendices at some point.

I need to specify the contracts and other blockchain code involved in more detail. Here is a diagram: 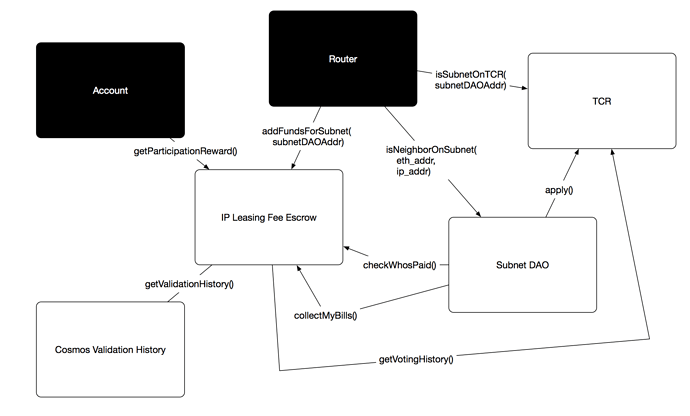 There’s a question to be asked about how we should reward staked tokens from the IP leasing fee tax.

In a conventional TCR, the gains for the token holders come both from vote rewards, and the appreciation of the token from people using it to stake on governance. In our system, we do not want to encourage votes, since votes involve drama. This is why we have the IP leasing fee tax, which rewards token holders even if there are no votes.

We also don’t want to token holders to be totally apathetic, so we only want to reward active token holders. We define activity as having tokens staked on governance or validation. This involves risk to the tokens and thought about how to stake them.

Just to be clear about it, the tokens staked are ALGT, and the IP leasing fee tax is in the payment token.

Reward by number of tokens staked across staking activities

This involves the same reward whether tokens are staked on votes, listings, challenges, or validation. The downside here is that it is most advantageous to stake tokens on the lowest risk items. This could have adverse effects ranging from distorting incentives of what to stake on, to causing users to create fake votes to stake on as a safe way to earn a return etc.

Reward proportional to the reward of the underlying staking protocol

In this case, we allow a different protocol to do the hard work of figuring out how much to reward, and have the IP listing fee tax act as an intensifier of this reward. However, this could encourage frivolous votes as well, since there would be an incentive to recycle money into rigged votes with big rewards to capture a larger piece of the IP tax.

Reward only for Cosmos validation

Cosmos validation is easy to track and reward, and since there is only one type of activity considered, there is no issue with the tradeoffs between activities. The downside of this is that it may act as an unbalancing disincentive to participate in governance vs. validation. However, this effect can potentially be balanced by adjusting the IP leasing tax.

However, this effect can potentially be balanced by adjusting the IP leasing tax.

how would this work? we increase the tax but how is it paid out in any way to incentiveize people.